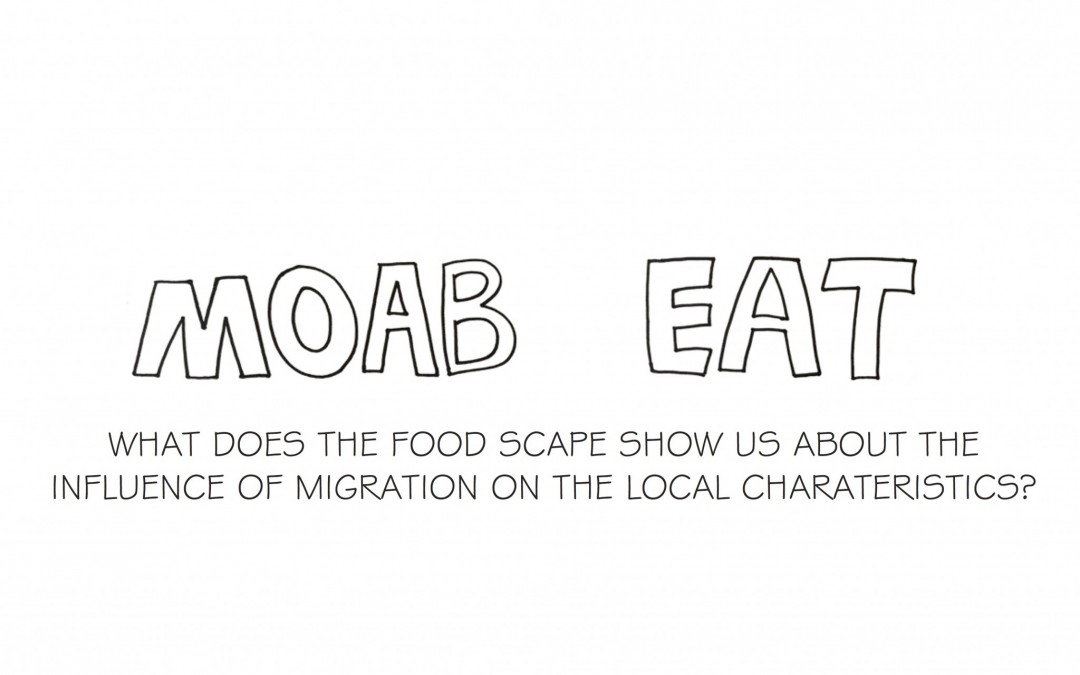 The main understanding we followed as a basis for our research, was that everything, everybody and every time can be perceived as heritage. In the context of defining “heritage from below” we have to esteem not only “important figures of history” and their big achievements hundreds of years ago, but also common people’s stories and recent events. When developing an initial manifesto of urban heritage, we largely built upon Kevin Lynch’s text “The Presence of The Past”.

With this understanding in mind, we went out to explore Moabit with a dérive. On our walk, we passed hidden yards, the Spreeufer, the district’s big industrial area, different churches, and finally ended up at the Turmstraße again. The industrial character and the traces of migration made us wonder about the history of guest workers in Moabit. We expected that this could also be the foundation of all the shops and restaurants connected to different nationalities there.

We conducted interviews with restaurant-owners and staff in the Turmstraße, which we first approached very open-mindedly – only with the topics of urban heritage and Moabit as a basis. We learned a lot about how our interviewees had come to Berlin as well as their perceptions of the Turmstraße and its development – but we also had to note that they were not directly connected to guest workers. Rather they had replaced other shop owners with a migration background. In addition, we tried to find out more about their personal connections to the neighborhood. This was grounded on an understanding also drawn from Kevin Lynch, that one of the functions of urban heritage is to give people the secure feeling of rootedness in history. The people that we interviewed actually described weak connections to the surrounding urban space, but strong personal networks that were mostly based on family ties. By bringing in their roots from all over the world, people produce the specific heritage of Moabit. Looking at food, this mixing of cultures becomes even more evident, when for example Lebanese falafel and Iraqi mango sauce are combined. These aspects led us to our research question “What does the food scape of Moabit show us about the influence of migration on the local characteristics?”, which guided us in the creation of our archive.

Starting from the two poles of food and migration, we built our archive “MoabEat”. The page can be accessed from both directions, but the topics are closely interconnected and linked to each other. Via the easy entrance of food, people can also access the topic of migration. We wanted to show the complexity of heritage in Moabit by connecting many different narratives – of people, places and also foods. Heritage is not only buildings; it is also recipes, culture, practice, stories. In an ANT-way, we let things and places speak for themselves and tell their stories. This also shows how the urban network looks from the perspective of each element. Inspired by Christopher Alexander’s “A city is not a tree”, we also allow overlaps and repetition between different narratives, because some aspects are connected to various other ones.

As a medium, we used comic strips that show a narrative in different tiles. The graphic novel style holds many advantages: It provides an easy access to a serious topic. It helps telling the stories from a “narrative”, personal point of view – according to the goal of showing “heritage from below”, which is not necessarily  linked to official numbers and reports. This “harder” information can be accessed in a second step by clicking on one comic tile of the narrative. In the archive, informal narratives tell serious stories about migration, urban development, and local networks. The stories are further supported by “hard facts” and historic contextualization in the sub-stories; “tangible” and “intangible” heritage are brought into connection. In this way, the archive can be used both informally by the interested public and as a tool for academic analysis of urban developments.

During our research and when constructing the archive, we specifically collected and used information that was linked to our topics of focus. Working with the data, we made conscious choices about which information to use and also which to keep from the public. All our activities took place in an university context and in limited time. We are aware that, if the archive should be launched and kept running, this context is up to discussion again. In order to maintain an archive like MoabEat, money, time, and artistic resources are necessary. This is especially true if the archive is supposed to be an evolving tool that shows a development over time. Different possible curating institutions of the archive would bring in different rationalities of maintaining it. The question of who is the right one cannot be answered, we just want to stress: It is a crucial one. As Michel Foucault points out in “Archaeology of Knowledge”, the creation and preservation of knowledge is dominated by prevailing power structures. In the context of “heritage from below”, any curating should follow the goal of making knowledge creation and consumption accessible.

When talking about urban heritage in the context of migration and heritage of mixed origin, it is useful to make the bridge to Dar es Salaam. Our graphic novel approach was partly inspired by the intriguing “Street Level Dar” by illustrator Sarah Markes. Dar es Salaam is the fastest growing city in Tanzania and is largely coined by migration flows. Dar has stories to tell, which are complex, which connect to food, migration, and urban developments. The foodscape shapes and describes the urban structure, as it for example strongly divides different ethnic quarters. This makes the approach very applicable to Dar on the one hand. The results, on the other hand, may vary, since the functioning of the two cities builds on very different historic and cultural backgrounds. Nevertheless, it is worthwhile approaching Dar like this, because these are exactly the results, an urban comparative research can offer: We can recognize differences despite similar circumstances and similarities despite very different environments.

When approaching “heritage from below”, we maybe first need to descend from our ivory tower. In the project, we tried to focus on topics that are close to people’s living reality and to make them easily accessible. We wanted to find out more about parts of urban heritage that we were actually wondering about but that are badly documented in traditional archives. The topic of food and migration might sound trivial at first glance, but stories like the development of falafel culture in Berlin tell much more about urban development than one might expect. Miriam Stock for instance analyzed this particular case and argues that the spread of falafel culture is closely linked to processes of gentrification. From a MoabEat archive that shows narratives in different times and their connections, one could learn a big deal about migration flows, social polarization, or gentrification, but also about the neighborhood and different foods.

For me, it remains a crucial question, who decides upon this selection. We as students? The general public? An institutional curator? Actually attracting awareness for this question is maybe a first step to approach it in a more sensible way.

Thinking about urban heritage led to a new experience for me, since I really am ambitious to logically categorize things. Even before reading Kevin Lynch’s text, but yet the more after reading it, the complexity of the overall topic already constituted a positive impact on my understanding and thinking of urban issues. Urban heritage can be perfectly equated with Schrödinger’s cat. It is and is not at the same time, depending from which perspective you look. Still the approach with “from below” was kind of spongy for me. Of course it can be argued that it is about stories that are told by individual persons instead of opinion-forming institutions, but during our field work and the design process of the archive that ambition was rather hard to implement from my point of view. And the reason for that is curation, which always is a top-down intervention to the story telling. We made that experience when we had to cut out information from interviews that were not political correct or used comics to allow interviewees a sense of anonymity.

Nonetheless working on the studio was an inspirational task. It also can be adapted to general planning. Since we not only had to present the information we gathered, but actually had to care about who people would approach these information.

This studio made me take the digitalized archive into consideration, bringing the notion of heritage from below into designing the online platform. Considering the concerned elements in designing broadened my horizons on advantage of interactive mapping as a fresh chance as well. Among others, in relation to the possible actors, we mainly aimed the local residents or citizens as our user, but I felt it is yet ineluctable to curate the archive without any help of the academic institute or the political will, leading to political feasibility in the end. For example, the paper, ‘Die Bedeutung des Quartiersmanagements für die Integration von Migranten’, could be interrelated with our MoabEat archive.

In comparison with Dar es Salaam, it would be pretty possible with the theme of food and migration, which actually we, as the team of boundary, started to have a look unfortunately quiet late in Dar. I’m not sure yet how deep we could dig into the migration theme, because we felt at that time sort of difficulty in conducting the interviews about the different cultural and migration background in city center. Nevertheless, I’m still strongly interested in this topic in Dar, which has accepted the different cultures through the colonization and the Indian Ocean Trade.

I’m looking forward to designing Dar archive at summer school, especially how we could figure out the possible user, how it would be differently designed and which topic could be covered in detail. 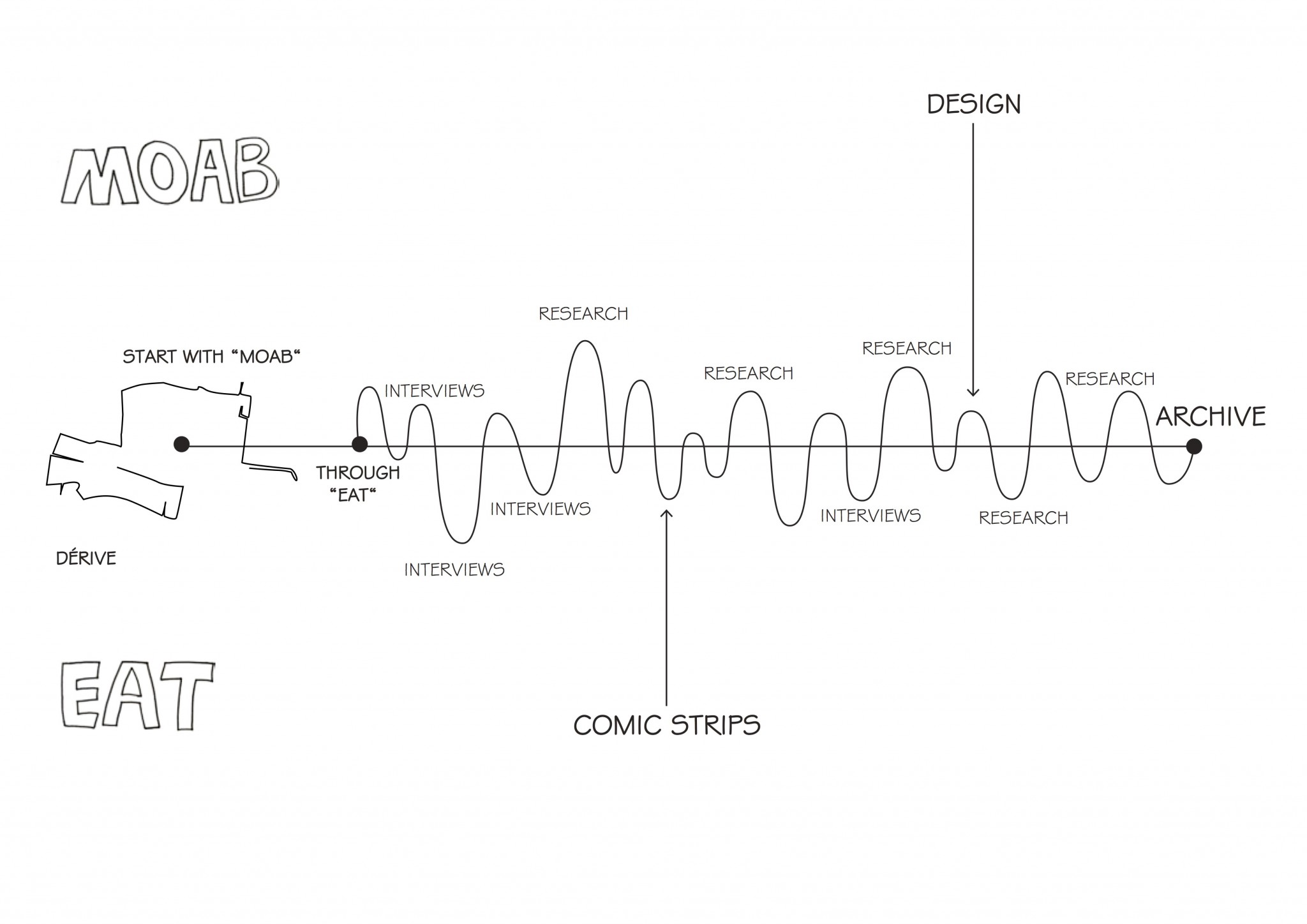 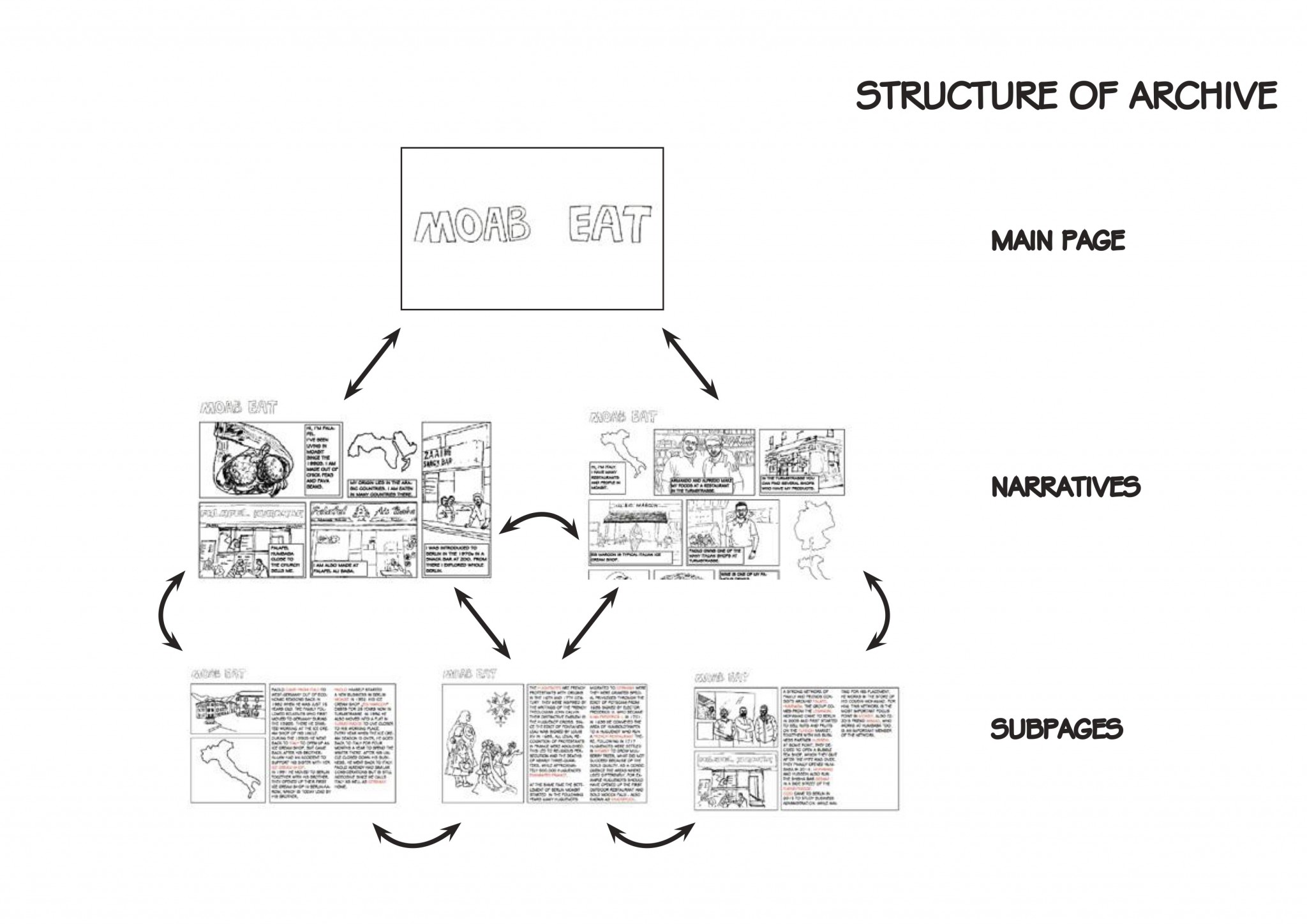 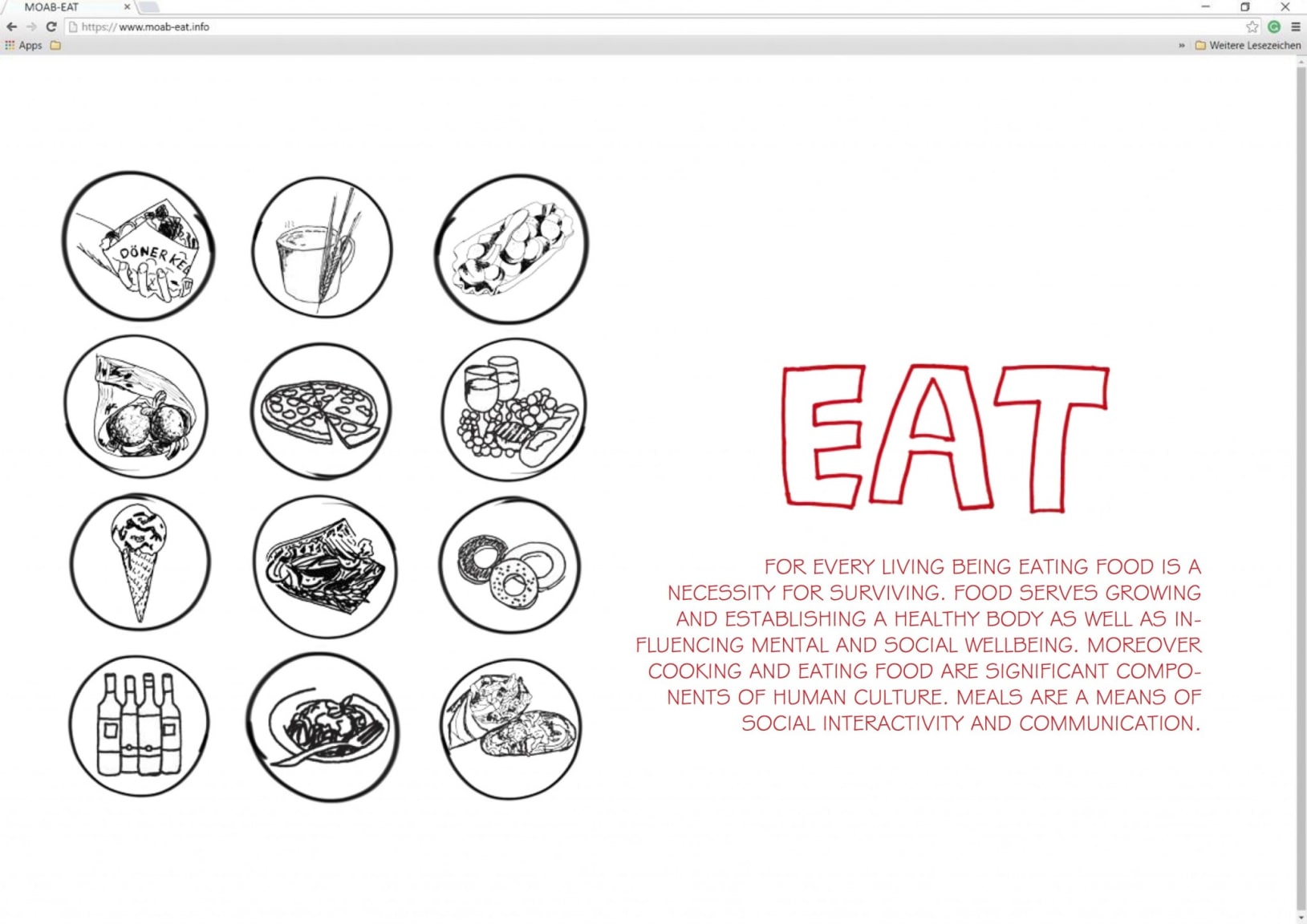 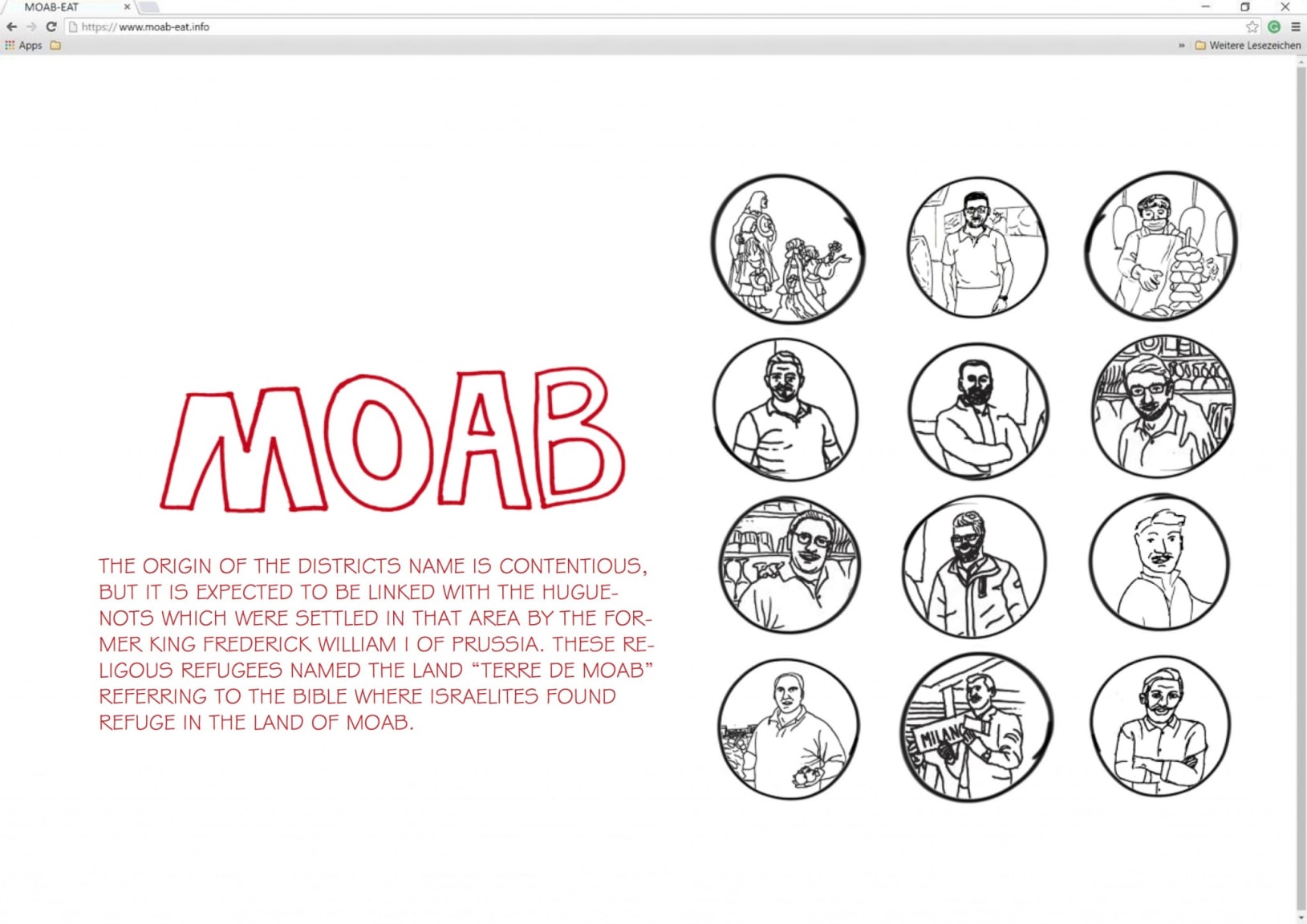 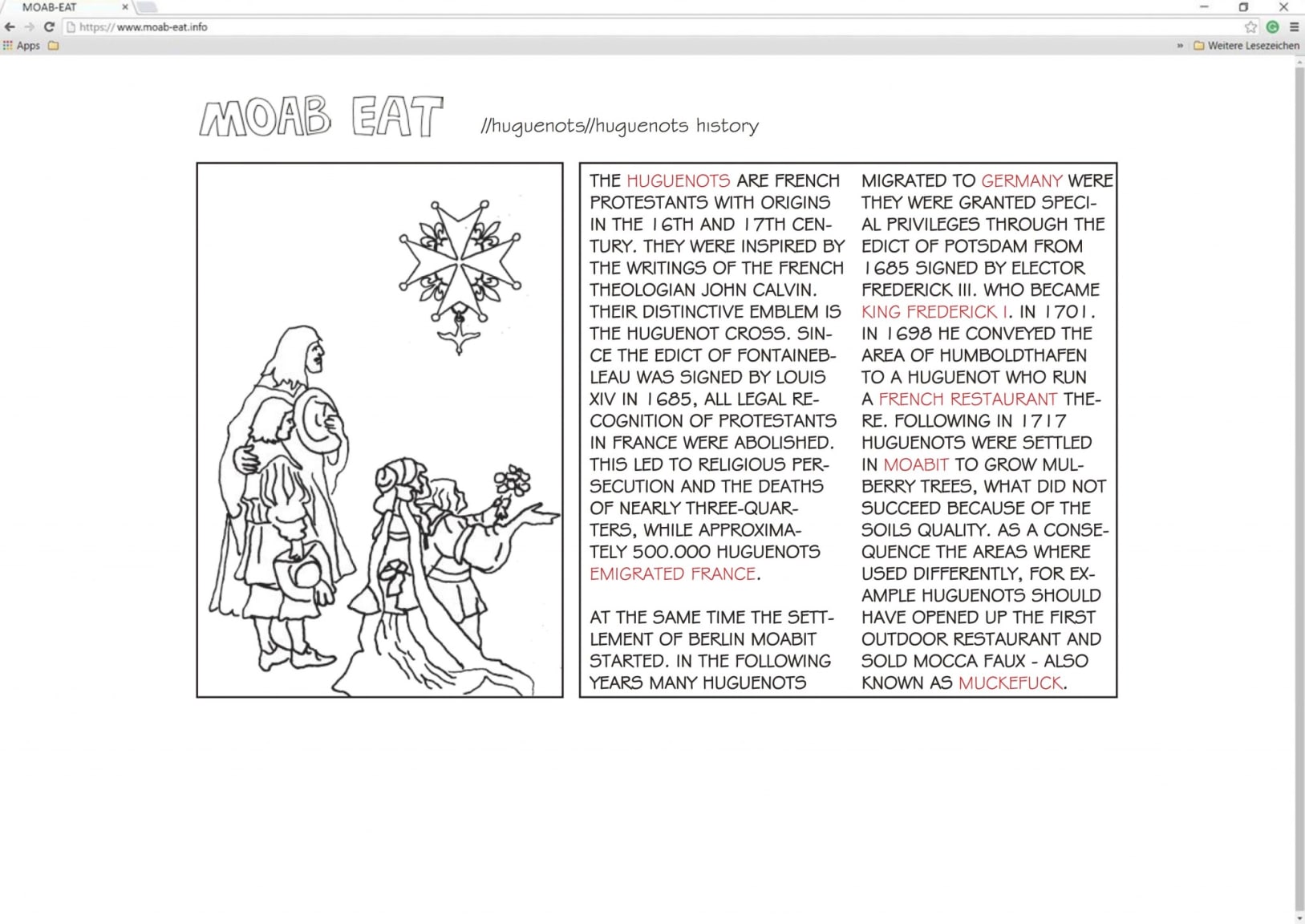 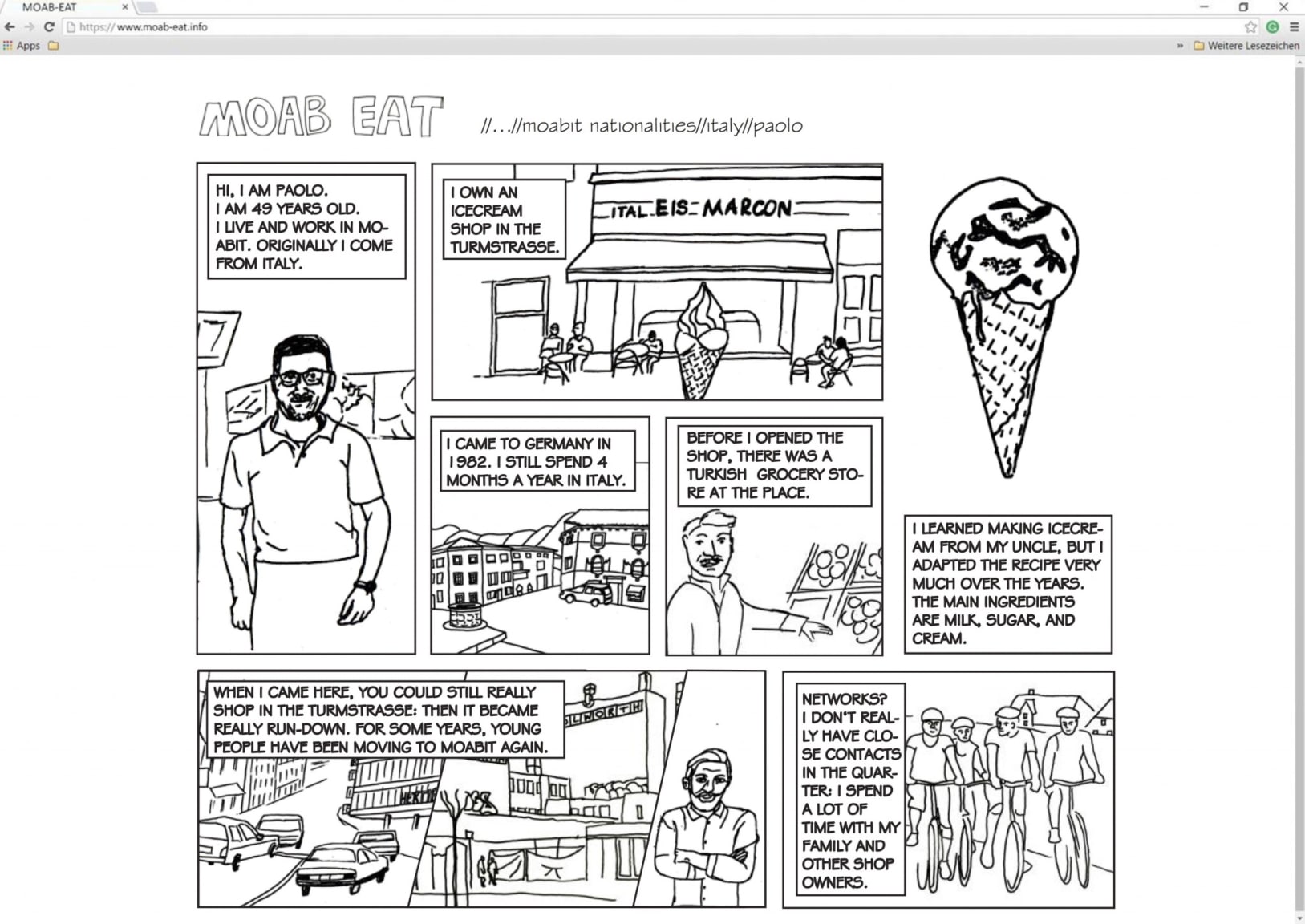 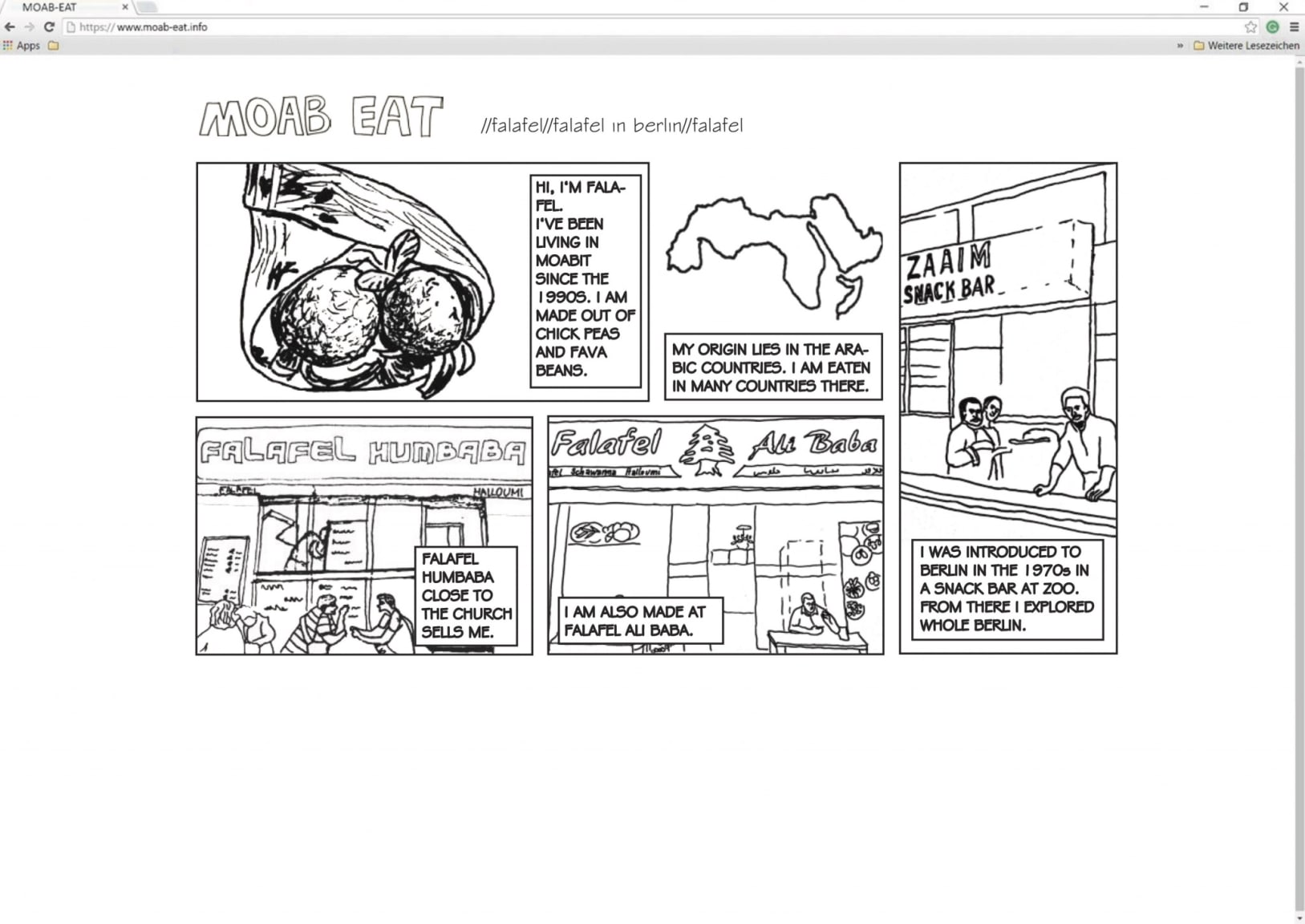 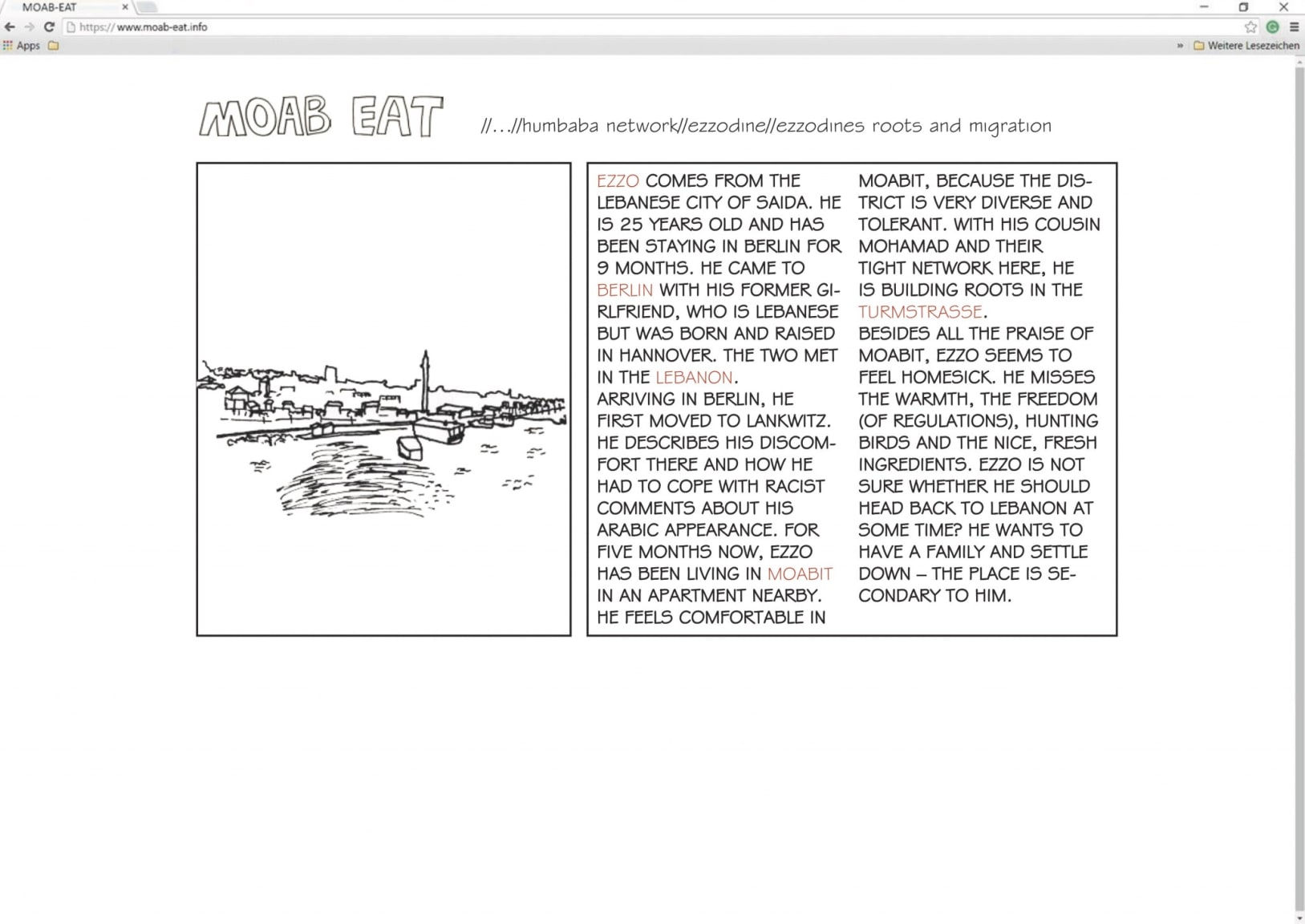 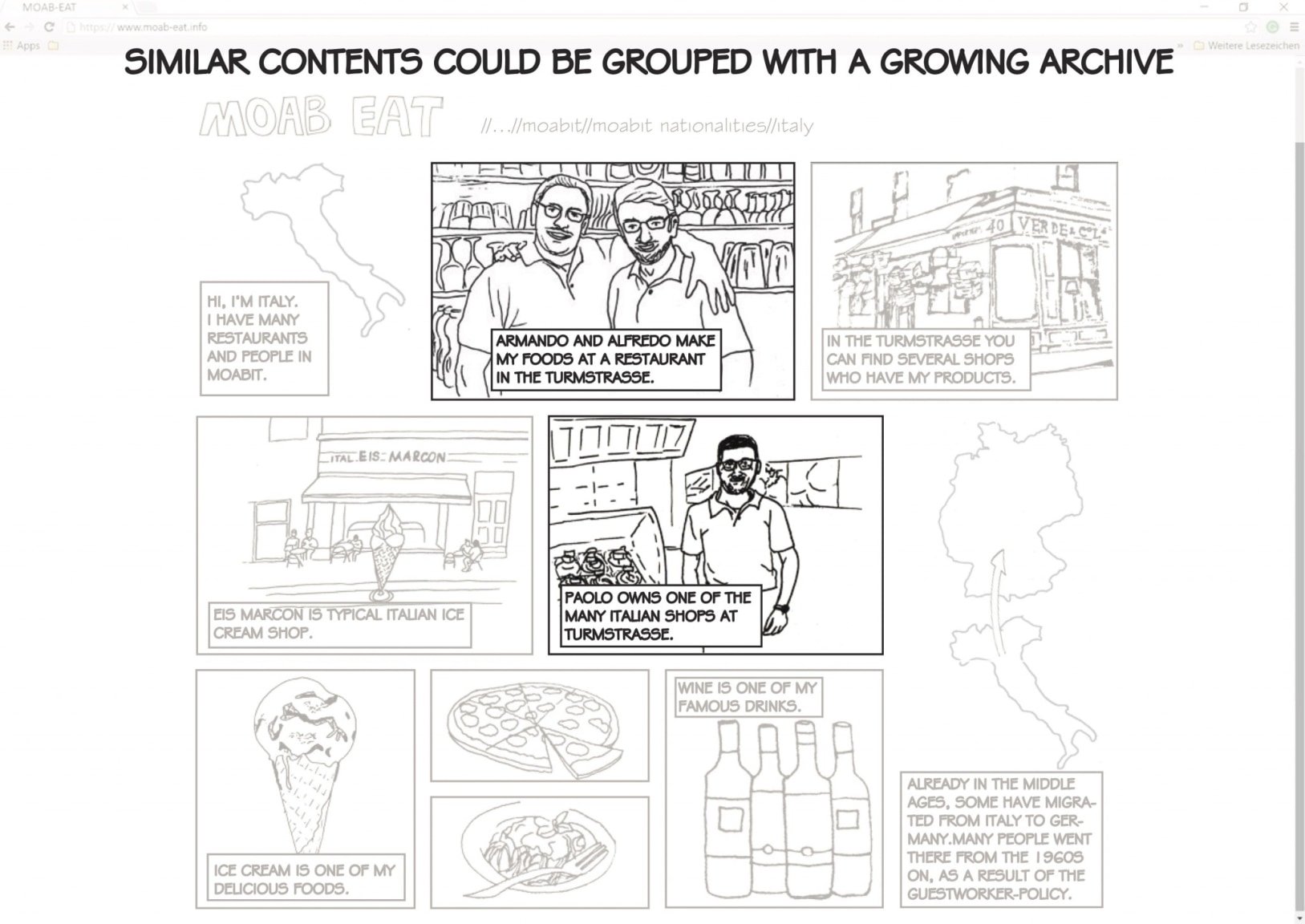 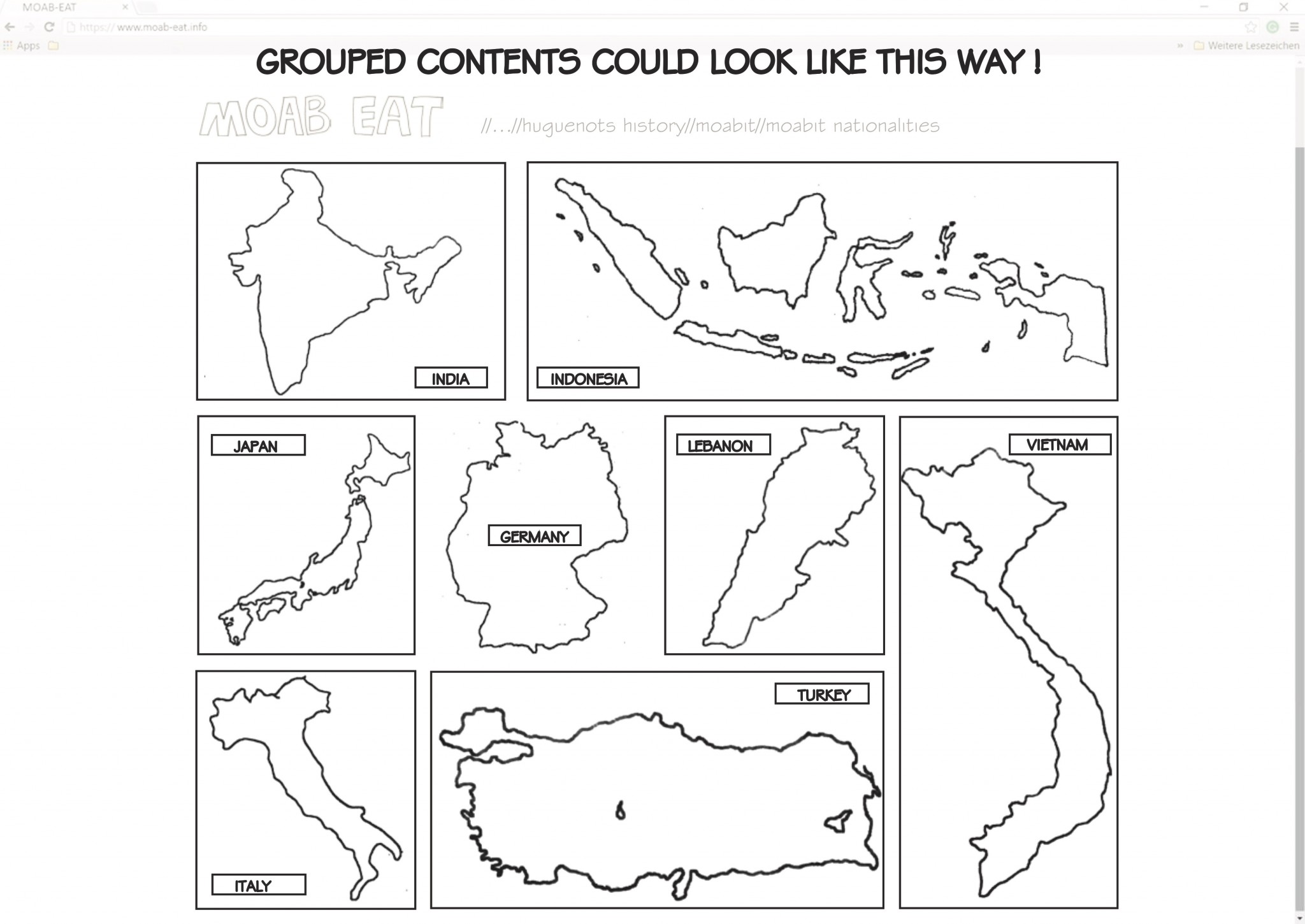