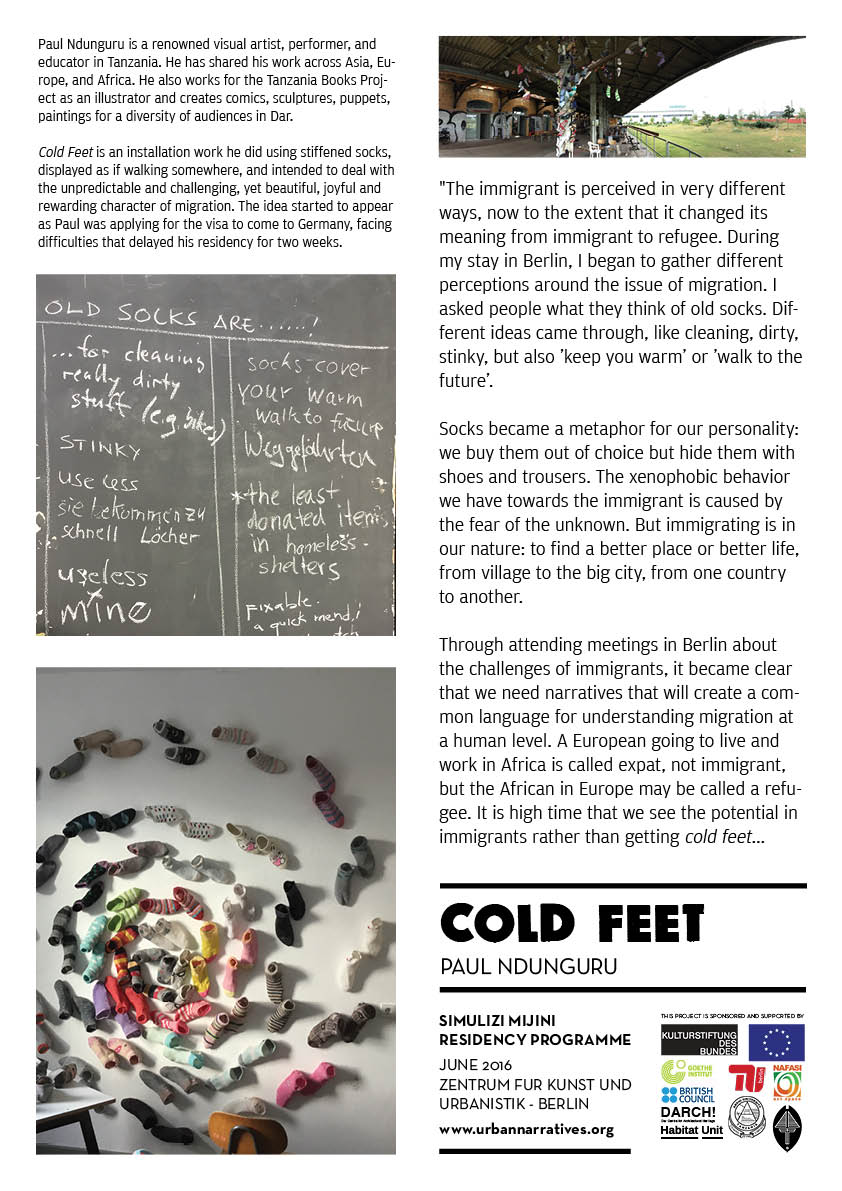 Cold Feet​, is an ​installation work, an “insulation” I did using stiffened socks, displayed as if walking somewhere, and intended to deal with the unpredictable and challenging, yet beautiful, joyful and rewarding character of migration. 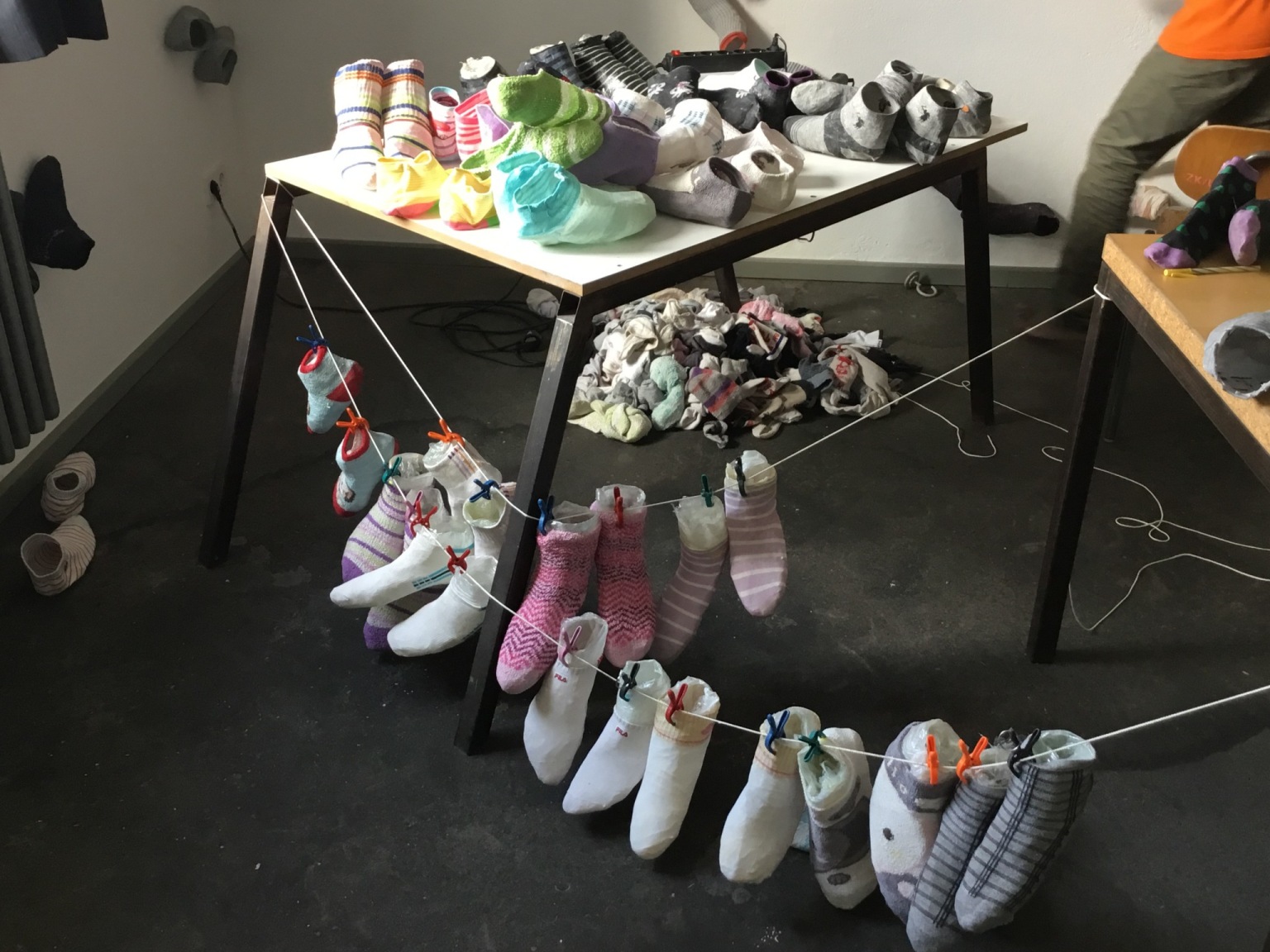 The idea started to image during the time I was applying for the visa, and faced difficulties that delayed my residency for two weeks. The word immigrant has a different perception now, to the extent that it changed from immigrant to refugee.

During my stay in Berlin, I began to gather different perceptions around the issue of migration. I asked people what they think of old socks. Different ideas came through, like:
– Are for cleaning
– Really dirty
– Cleaning stuff e.g. bikes
– Stinky
– Cover your warm walk to future
– The least donated item in homeless shelters

Some even say it reminds them about lies of Santa Claus from their parents. Most of the ideas were negative but after putting the stiffed socks together with composition it begin to tell stories.

Socks became a metaphor for our personality: we buy them out of choice but hide them with shoes and trousers. The xenophobic behaviour we have towards the immigrant is caused by the fear of the unknown, and this is due to a luck understanding of others personalities. It is the fact that each one of us have tresses of many generations that we have immigrate from one place to another, to find a better place or better life, it can be for instance one moving from village to the big city or from one country to another: immigrating is in our nature. 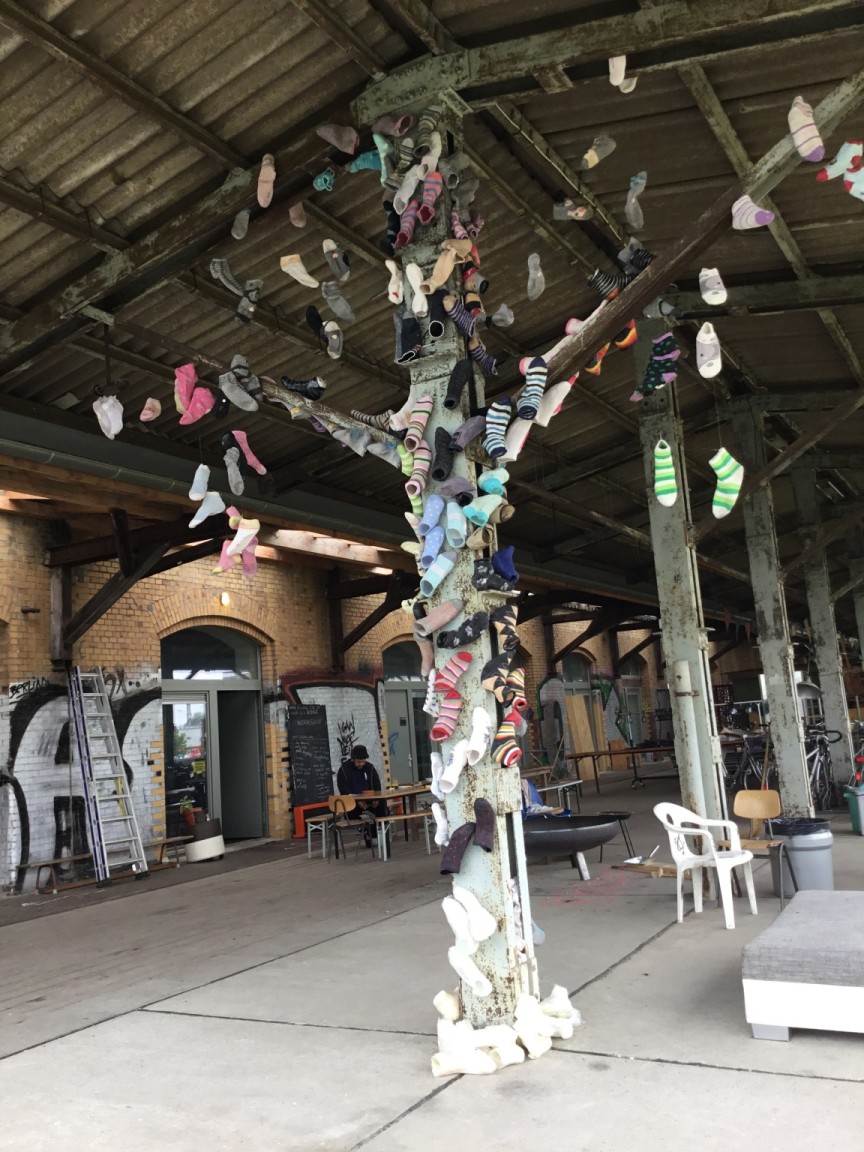 Through attending meetings in Berlin about the challenges of immigrants, it became clear that we need narratives that will create a common language for understanding migration at a human level. A European going to live and work in Africa is called expat, not immigrant, but the African in Europe may be called a refugee. It is high time that we see the potential in immigrants rather than getting cold feet…

Each composition tells a different story,the displayed Insolation of a spiral people say it shows how we all  scramble together for opportunity to a small path and mostly get crashed. The ideas of using socks can create many layers of ideas and topics,it suits the theme of urban narratives as we are all fighting for having space and ownership. My idea for the insolation is to go public by making a video to capture the socks floating at the river in Berlin near the Bundestag, to commemorate the immigrants who came by boats to Europe and lost their lives. There was not enough time for that I am hoping that the idea can be done by an artist at ZKU in the near future.