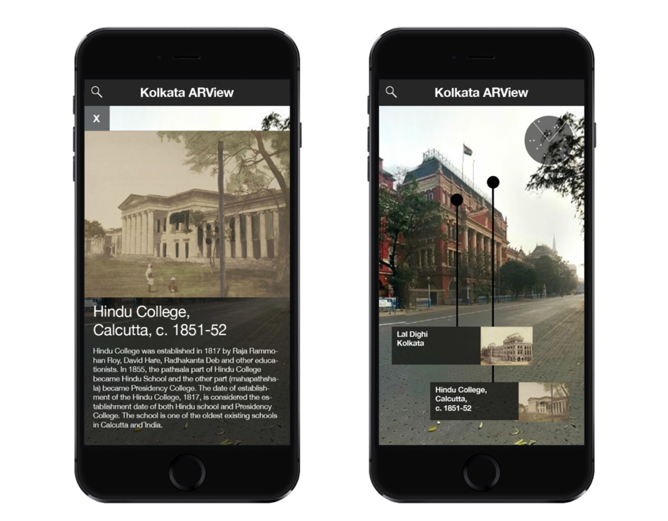 ‘Timescape: Kolkata’ is an Augmented Reality app implementation that allows mobile-phone users to explore rare archival images and data about heritage sites in Kolkata, as they walk through the city.

…a smart phone application will enable users to explore rare archival images of more than 100 geographical points and heritage sites of the city.

The application, Timescape: Kolkata, put together by the University of Liverpool, the Jadavpur University and the British Library, creates an augmented reality that allows the users to imagine themselves in the environment.

Photographs dating back to the 19th century were provided by the British Library.

“These photographs in the mobile app are one of the earliest of Kolkata. The British Library has provided the photographs, which were taken by Bourne & Shepherd Company, which has set up the world’s second studio in the city, and two other photographers Frederick Fiebig and W G Stretton,” Sujaan Mukherjee, a researcher at the Jadavpur University told The Hindu.

The richness of Kolkata’s historical buildings, often half-hidden behind the facade of an expanding modern city, is reflected in the copious archives of images of the British Library collection, said John Falconer, lead curator of prints, drawings and photographs at the library.

The setting of the application launch in the galleries of the Victoria Memorial was also fitting as the monument is undoubtedly one of the most magnificent colonial buildings in the country. The mobile app will showcase the city in a way that brings Kolkata history to life, said Nandini Das, project lead from the University of Liverpool’s Department of English. “It will allow users to experience urban space in a fresh and exciting way,” she said.

However, those behind the initiative do not want it to remain confined to the city’s colonial heritage.

Professor Supriya Chowdhury of Jadavpur University said there was a lot of scope for augmenting the application with historical data of non-colonial landmarks as well.

“We have added layers of historical data, photographs and geographic coordinates to the application which is open source and universally accessible,” Prof. Chaudhury said.